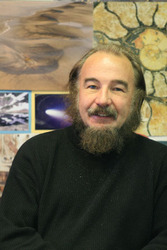 In Particle Physics and Fundamental Interactions, my main interest is in some better understanding of the mechanisms at play:

Key tools may reside in the breaking of discrete symmetries. Indeed, the best-known interaction nowadays is the gauge interaction, which is intrinsically symmterical under the reversal of space coordinates, simultaneously with a particle-antiparticle exchange (CP). This symmetry is also largely equivalent to Time reversal (T). We know that, even for one particle, (in absence of any entropy considerations), these symmetries (T and CP) are (feebly) violated. Finding how this symmetry violation (most probably linked to mass generation) is inserted in a unified scheme, most likely based on gauge considerations, is probably a key to a better apprehension of this framework.

On a more particular basis, I keep also a great interest in neutrino physics and weak interactions in general.

I insist on experimental/observational verifiability of the theories, and try to find in existing phenomenology the confirmation of the mechanisms advocated in less reachable conditions.

As a matter of general philosophy, I don't believe in the existence of pre-established laws, (or mathematical formulas) which would be laid there for us to discover (a bit like Plato's idea's), but rather in an operational dialog between men (scientist) and nature, in which the most efficient tools are developed to describe a situation, and verified by their ability to act upon it. The laws emerging in this way are not necessary "simple", they are just the simplest possible to use for our brain.